LITIGATION FORUM PRAVO.RU. A.T. LEGAL PARTNER PAVEL GANIN'S SPEECH: "THE GAME IS PLAYED OR THE STRATEGY OF INTERACTION WITH THE CLIENT AFTER THE FAILURE IN THE FIRST INSTANCE. THE PATH FOR THE FUTURE". 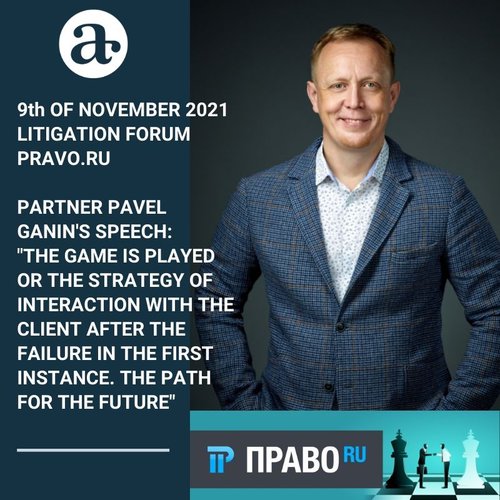 On November 9th in Moscow, at the Swissôtel Krasnye Holmy Hotel a PRAVO.ru conference on precedent court disputes took place.

A lawyer's work in court resembles a skillful game of chess. An experienced litigator, like a grandmaster, with a cool head thinks two or even three moves ahead. Like a grandmaster, the lawyer studies the opponent's tactics before the trial, decides what evidence will be used, who can be involved as a third party. During the trial itself or at the middlegame stage, speaking the language of chess, the litigator has a difficult task to consider the "psychological" type of the judge and to present his position clearly, but briefly and concisely.

Invited experts, who can rightly be called "grandmasters of litigation," will share tips on what tactics to choose, how to conduct interrelated processes, and how to checkmate your opponent.

Pavel Ganin, A.T. Legal Partner, will speak about the case considered by the Arbitration Court of the Moscow Region (Case No A41-21198/2015) on the insolvency (bankruptcy) of JSC Petushinsky Metallic Plant.

We invite colleagues, Trustees and all interested parties to the practical event https://event.pravo.ru/view/233609/ 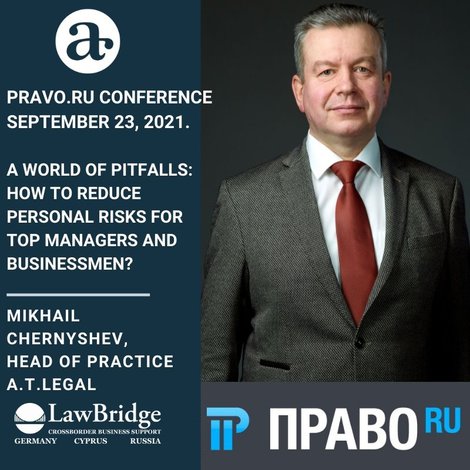 A captain who wants to avoid pitfalls should know where they are. The same is true for business. Entrepreneurs are having a hard time right now. Because of the pandemic, the financial situation of many companies has worsened, debts to counterparties are growing, and sooner or later they will have to 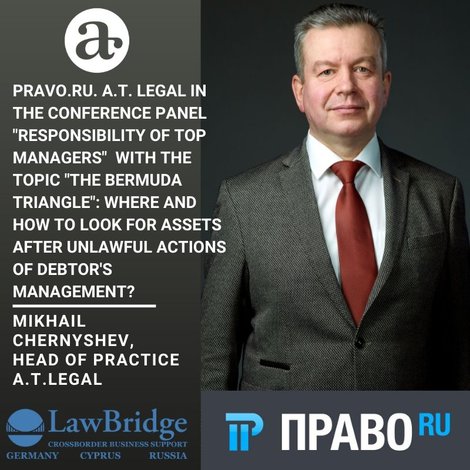 PRAVO.RU. A.T. LEGAL IN THE CONFERENCE PANEL "RESPONSIBILITY OF TOP MANAGERS" WITH THE TOPIC "THE BERMUDA TRIANGLE": WHERE AND HOW TO LOOK FOR ASSETS AFTER UNLAWFUL ACTIONS OF DEBTOR'S MANAGEMENT? 23.09.2021

Mikhail Chernyshev, Head of Practice, A.T. Legal - speaker of the Conference PRAVO.ru "PILOTS WHO KNOW HOW TO GUIDE A BUSINESS SHIP TO A SAFE HARBOR " A.T. Legal in the most interesting panel of the conference PRAVO.ru "Liability of Top Managers" with the topic "The Bermuda Triangle": Where and how 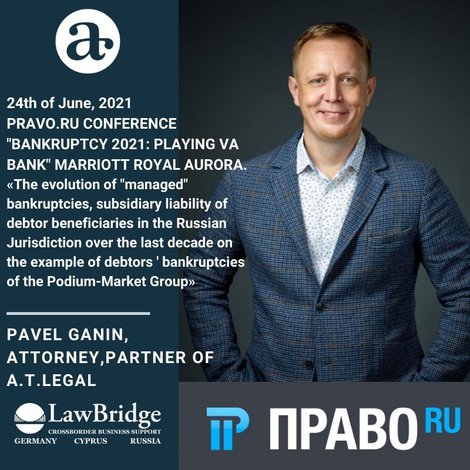 On June 24, 2021, the Marriott Aurora Hotel will host Pravo.ru conference "Bankruptcy 2021: Playing Va Bank". The moratorium created a "negative growth" in the number of bankruptcies in 2020 and led to "deferred demand" in 2021. Today the bankruptcy procedure in Russia resembles Russian roulette