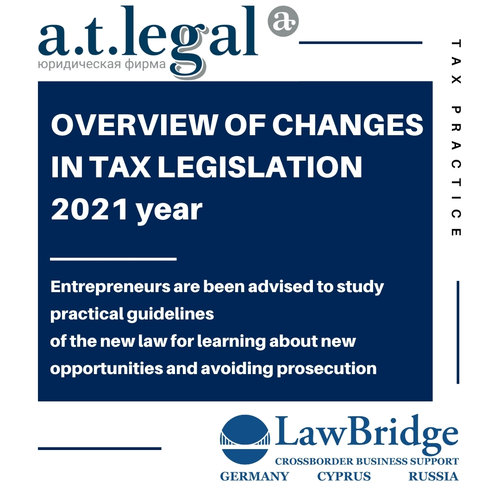 On February 17, 2021, Federal Law No. 6-FZ "On Amending Part One of the Russian Federation Tax Code" was passed, which came into force on March 17 this year.

Entrepreneurs are advised to study practical recommendations about the new law in order to learn about the new opportunities and avoid liability.

Taxpayers and tax agents will now be required to keep accounting and other documentation necessary to calculate and pay taxes for 5 years.

The same deadline is set for documents confirming the payment of tax. Now this term is 4 years. The period begins from the time of drawing up a corresponding document.

Taxpayers are obliged to inform tax authorities about ownership of more than 10% of shares in foreign legal entities, about establishment of organizations abroad that do not have characteristics of a legal entity, as well as to provide a list of foreign companies controlled by them.

The state is consistently expanding the scope of control over the timeliness and completeness of tax payments, especially on the part of the actual beneficiaries of companies.

The list of persons from whom the tax authorities have the right to demand information and documents during tax audits has been updated. Now such requests may be addressed to current and former registrars of shares of the audited taxpayer.

Banks are required to provide the following documents and information at the request of the tax authorities:

- Copies of passports of persons who have the right to withdraw funds from accounts;

- copies of powers of attorney for disposition of funds in bank accounts;

- documents related to opening, maintaining and closing of accounts;

- cards with specimen signatures and stamps;

- any information, held by the bank, on beneficiaries, beneficiaries of organizations and their representatives.

Increased attention is paid to transactions concluded by interdependent persons, i.e., subjects related to each other, which by the nature of their relationship may act in concert to obtain an unjustified tax benefit.

The largest taxpayers could conclude an agreement with the authorized state body on the procedure of price formation, which determined the mechanisms of price formation and application of pricing methods in specific transactions.

Previously, even if parties to foreign trade transactions in relation to which the above agreement was concluded were foreign entities, the methods of tax control specified in the Russian Federation Tax Code were applied. Now it is allowed to use similar methods provided for in foreign legislation, but provided that the obtained tax results are comparable.

Now taxpayers are obliged to keep all accounting and other documentation for the abovementioned transactions for 10 years.

The criteria for classifying foreign trade transactions as controlled have been updated, i.e., transactions subject to special tax control due to the fact that the parties are related parties.

New deadlines for complying with tax authorities' requests to provide documents during inspections related to transactions between related parties: instead of 5 days, documents can be provided within 10 days.

The list of grounds for dismissal by a higher tax authority of a complaint received from a taxpayer without consideration is extended: 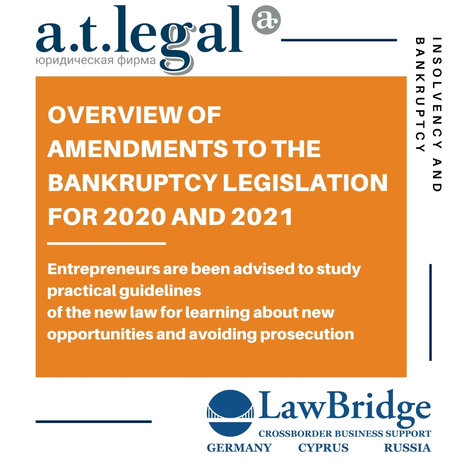 OVERVIEW OF BANKRUPTCY LAW CHANGES IN 2020 AND 2021 A total of 15 federal laws on changes to the Bankruptcy Law will have been passed in 2020-2021.   Moratorium on bankruptcy Prohibiting arbitration courts from initiating insolvency (bankruptcy) proceedings on the basis of creditors' 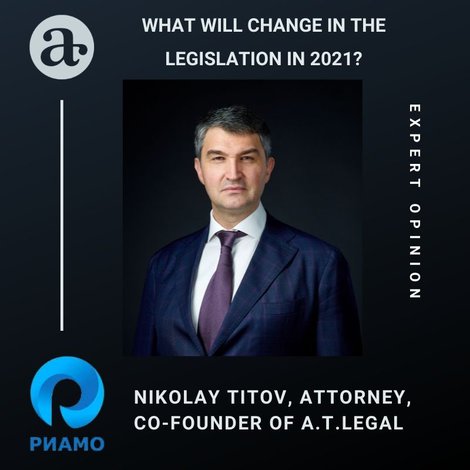 From the beginning of 2021, innovations in labor, tax and other spheres will come into force in Russia, which can significantly affect the lives of most citizens. Next year will be no exception. In particular, issues with remote employment will be legally regulated and the list of jobs available to 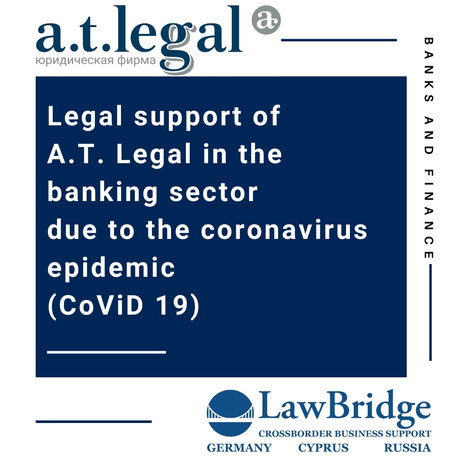 LEGAL SUPPORT OFFERED BY A.T.LEGAL IN THE BANKING SECTOR IN CONNECTION WITH THE CORONAVIRUS PANDEMIC (COVID 19) 30.04.2020

Dear colleagues, It is now clear that the coronavirus epidemic is having a direct negative impact on the economy. At the same time, its consequences will also have a serious delayed effect. For this reason, the Russian business community has essentially been forced to operate under force majeure